Below are the wedding photographs of the five children of Donald Duncan Cameron (1878-1941) and Isabella Allan (m.s. Brownlees) Cameron (1874-1958) of Woodnorth, Manitoba.

After the wedding photos are some other family photos from the 1940s and 1950s and a few miscellaneous items, letters, cards, etc.

OTHER PHOTOS from the 1940s 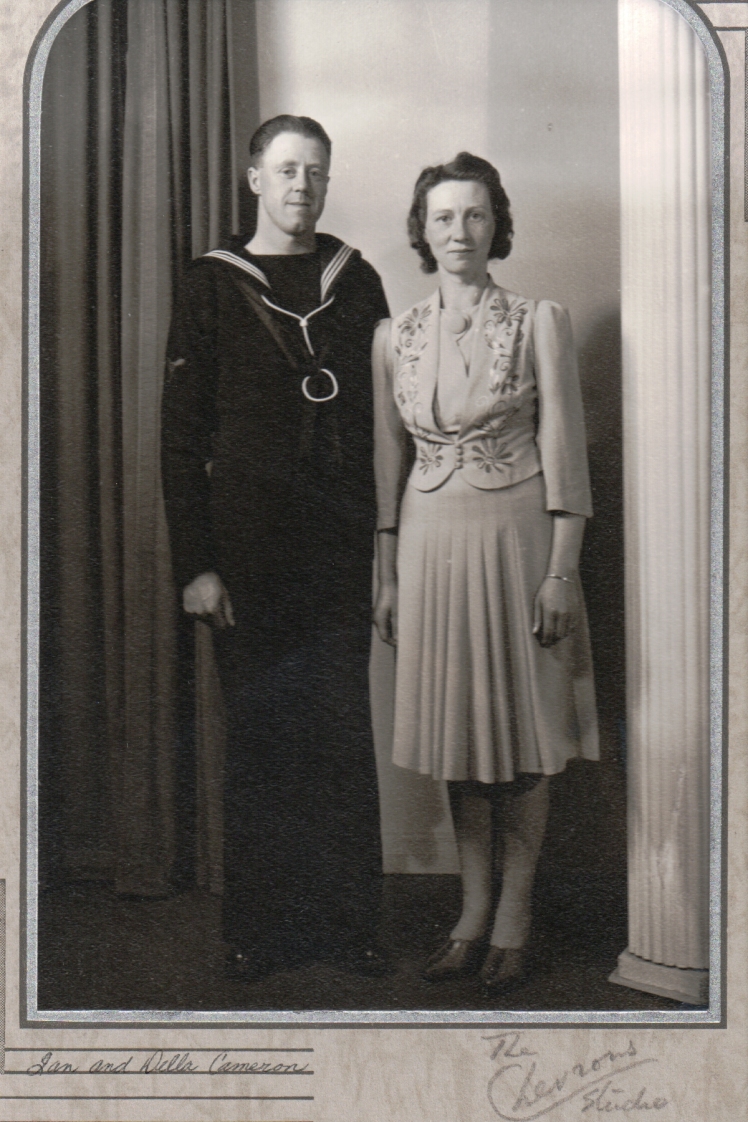 Donald Ian Cameron (1912-1998) and Della Ileen Cameron (1912-2000) taken at The Chevron Studio in Victoria British Columbia. I think it operated from 1943-1950. Ian was in the Canadian Navy during World War II and was posted to Victoria for part of his time in the service.

Below is a post card Ian sent to his mother, dated Sept 20, 1944, of his ship the HMCS Gananoque.

“D.I.Cameron v.40088 HMCS Ganonoque, c/o F.M.O, Halifax, N.S. Sept 20/44                   Dear Mother: Sorry I could not get back for harvest, but guess you are getting along as best you can. How is the wheat running this year? Have they got over the summer fallow again? If not it will be in pretty bad shape. How did you get over your trip to Wpg.? As ever, Ian”.  There is an interesting article in Wikipedia on the HMCS Ganonoque, a minesweeper built in Toronto and launched in April 1941. It served off the east coast of Canada as a convoy escort. 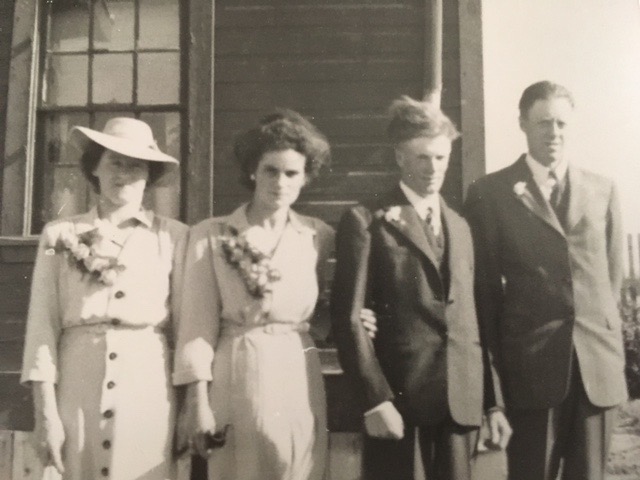 Some early pictures of the fifteen Cameron grandchildren are below:

There are a few letters, cards, etc, from various members of the family, that I thought might also be of interest so am posting them here.

At age 21, Doug and a friend took a working holiday to Australia. He sent this letter, postmarked 30 Nov 1969 in Melbourne, to his aunt and uncle in Woodnorth, Manitoba, describing part of his trip. It was a little later in this trip that he travelled to Tasmania and met his future wife, Jeanette Imms. Although it is very legible I have transcribed the letter further down the page for any readers who may have trouble reading cursive handwriting. 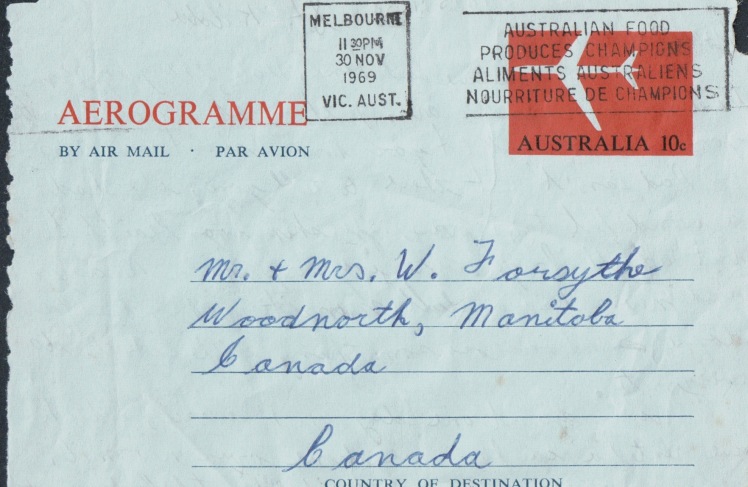 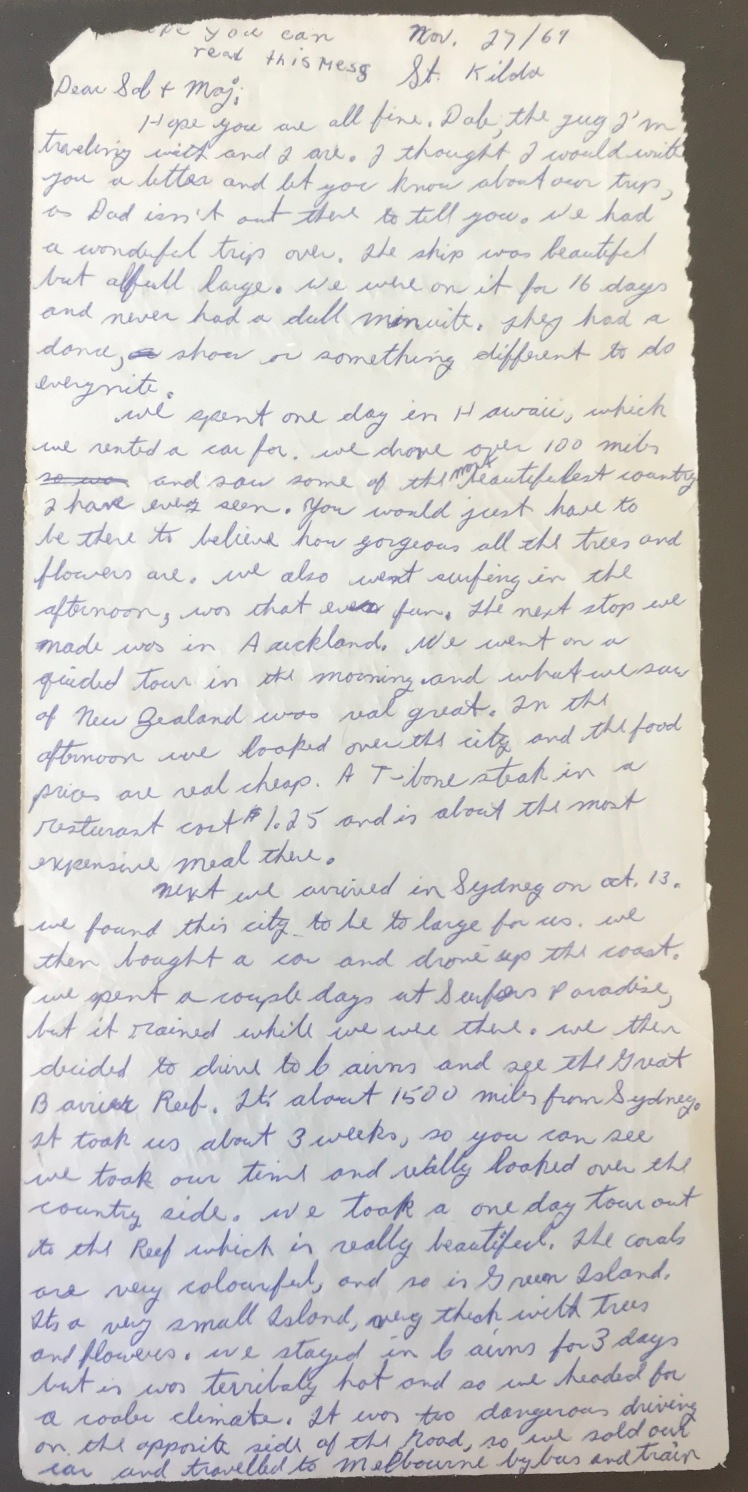 Transcription of the letter:

Hope you are all fine. Dale, the guy I’m travelling with and I are. I thought I would write you a letter and let you know about our trip, as Dad isn’t out there to tell you. We had a wonderful trip over. The ship was beautiful but awful large. We were on it for 16 days and never had a dull minuite. They had a dance, show or something different to do every nite.

We spent one day in Hawaii, which we rented a car for. We drove over 100 miles and saw some of the most beautiful country I have ever seen. You would just have to be there to believe how gorgeous all the trees and flowers are. We also went surfing in the afternoon. Was that ever fun. The next stop we made was in Auckland. We went on a guided tour in the morning and what we saw of New Zealand was real great. In the afternoon we looked over the city and the food prices are real cheap. A t-bone steak in a restaurant cost $1.25 and is about the most expensive meal there.

Next we arrived in Sydney on Oct 13th. We found this city to be too large for us. We then bought a car and drove up the coast. We spent a couple days at Surfers’ Paradise, but it rained while we were there . We then decided to drive to Cairns and see the Great Barrier Reef. It’s about 1500 miles from Sydney. It took us about 3 weeks, so you can see we took our time and really looked over the countryside. We took a one-day tour out to the Reef which is really beautiful. The corals are very colourful, and so is Green Island. It’s a very small island, very thick with trees and flowers. We stayed in Cairns for 3 days but it was terribly hot and so we headed for a cooler climate. It was too dangerous driving on the opposite side of the road, so we sold our car and travelled to Melbourne by bus and train.

When we arrived in Melbourne we had travelled almost 4,000 miles around Australia. We were now almost broke so we moved into an apartment and started to work for Safeways. When we save some more money we are going up to Perth and Adelaide, around February we think.

I see I’m just about out of space so I will leave you my address, so you can send me a Christmas card: F7 – 14 Alma Road, St. Kilda, Victoria, Australia

In my last letter from home, mom told me the good news about Pat & Merv. I don’t know their address so you will have to congratulate them for me.

p.s. Was their wedding in the middle of the World Series? [This is a little joke alluding to my Dad’s complaint that too many of our friends and family chose to get married in the Fall during baseball’s World Series, his favourite sporting event, meaning that he would have to miss seeing a game.]